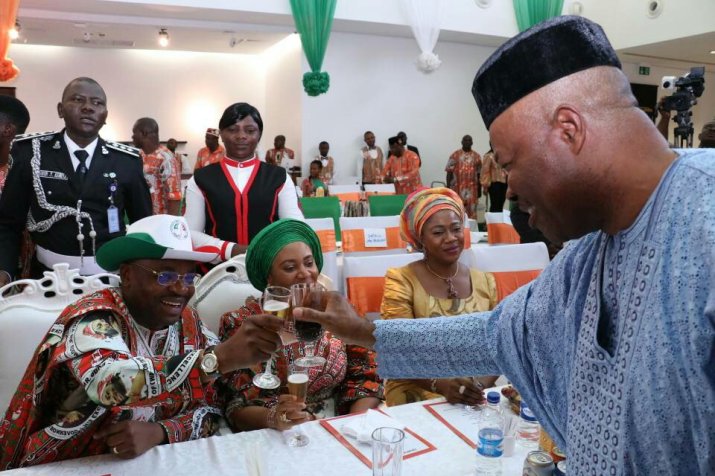 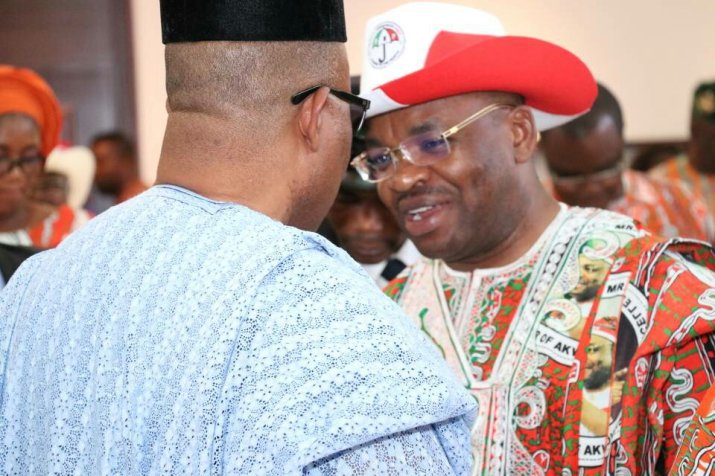 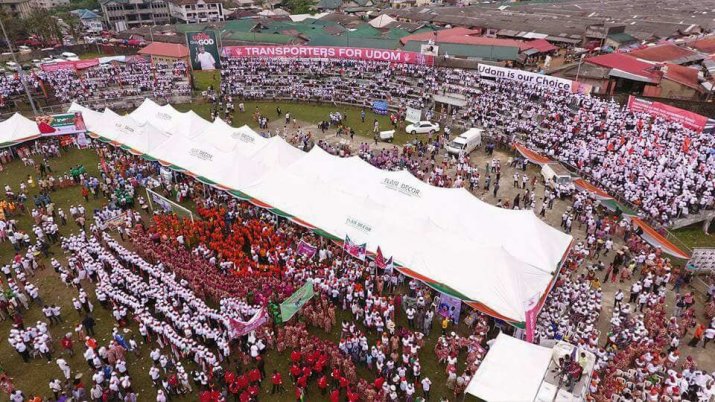 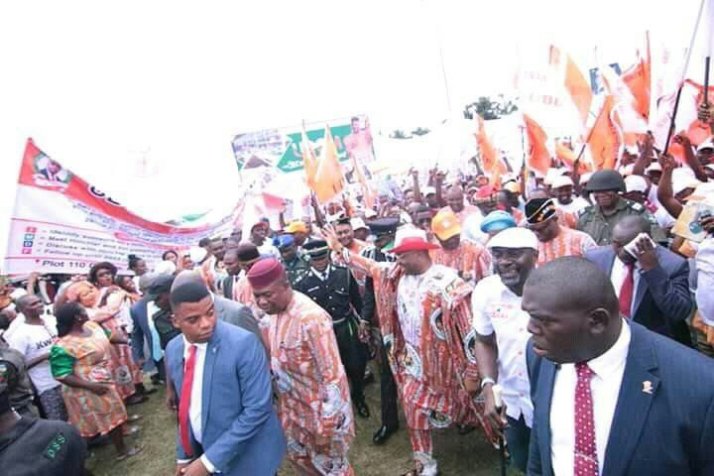 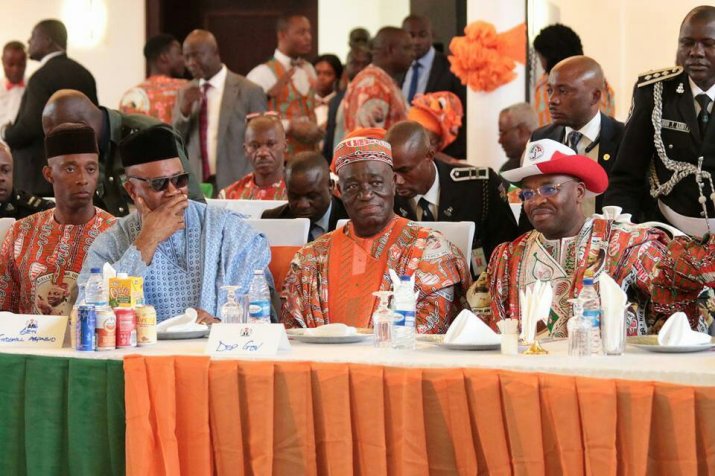 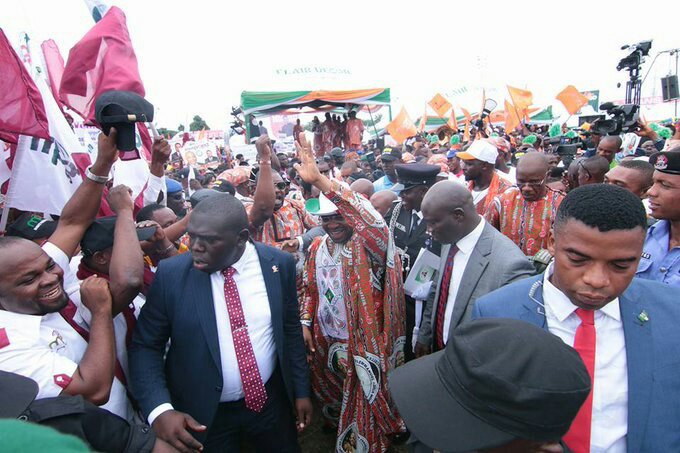 The decision of indigenes and residents of Akwa Ibom State to cast their votes on April 11, 2015 for Mr. Udom Gabriel Emmanuel, former banker and secretary to the State Government is not in vain as the fruit of that action are everywhere for the people to feel, see and partake of the goodies often commonly referred to as dividends of democracy.

During the campaigns, Emmanuel boasted that he would surpass superior performance implying his acknowledgement of the then outgoing administration as delivering superior performance. To achieve his ambition, he contrived a vehicle with a Five Point Agenda to wit: Wealth Creation, Economic and Political Inclusion, Poverty Alleviation, Infrastructural consolidation and Expansion and Job Creation. He knitted the items organically and deployed a holistic approach in tackling them. 36 months on, the people have come to terms with the fact that the agenda is not a fluke but an actuality attainable through a well articulated vision.

Perhaps what he has helped the Udom administration is the understanding of the economic dialectics and the drive to establish both sectoral balance and sectoral linkages. This appreciation has provided a seamless mobility with the governance structure set in a manner that has every sector salient to the other thus creating inter-relationship across all facets of development.

Governor Emmanuel in his inaugural speech gave a prognosis of his administration, isolating a myriad of areas that would constitute the focus. He was clear with his plan to transform the economy of the State through industrialization using public-private Initiative model. He posited that the approach would create opportunities for growth and improved living standards. Having understudied this effectively and drawn a blueprint to sequel it, Emmanuel made industrialization the mantra of his administration.

The inaugural address did not attempt to ignore other vital cords of governance. He therefore pledged to ensure the protection of lives and property of the people; promote unity and oneness across the State; accord respect to traditional institutions and elders; empower women and youth through a well-conceived welfare and capacity building programmes; ensure accountability and transparency in governance; pursue integrated rural development; stimulate trade, commerce and tourism; foster and maintain good working relationship with other tiers of government among others. Suffice it to say that he has kept faith with the isolated pledges in the past three years.

But examining Governor Emmanuel’s scorecard sector by sector would provide empirical information as well as tangibles that would ease the measurement of the strides of his government in the past 36 months and establish the requisite nexus among the sectors and how the linkages have helped in improving the conditions of the people of the State.

The road and infrastructure sector has been tackled aggressively. First in concord with its position as one of the 5-point agenda of the administration and sequel by the reality that infrastructure is a bedrock and precursor to industrialization. In this regard therefore, the administration in 3 years has constructed over 1,700 kilometers of road and 35 bridges. The present State Secretariat Annex was an abandoned uncompleted building that served as haven for social deviants. The administration completed it and turned it into the architectural masterpiece that is today State Secretariat Annex. As part of the infrastructure upgrade, it has constructed the second runway of Ibom International Airport. It must be stated that Akwa Ibom is the only State in the Federation that owns and maintains an airport. Flood which had severally ravaged Nsikak Eduok Avenue has also been fully tackled and brought to an end by the administration.

Another sector that has enjoyed the attention of the Udom administration is education. Governor Emmanuel understands the importance of education and its relationship to the growth and prosperity of the people. He views education as the nursery for manpower development and a breeding ground for citizenship consciousness.

Abreast with its importance, Governor Emmanuel has sustained the Free and Compulsory Basic Education in public schools enunciated by his predecessor thus making education in public schools at Primary and Secondary schools levels free. The administration has taken over the running of 7 Community Secondary schools hitherto run by communities. It has undertaken the construction and renovation of 62 school blocks. There have also been strategic interventions in areas like roads, equipment, and academic blocks in tertiary institutions.

The administration has extended its benevolence to procurement and distribution of free text books and other educational materials while sustaining the payment of subventions to public primary and secondary schools. To ensure that no indigene is denied the opportunity of writing WAEC and NECO on account of non-payment of examination fees, the administration expends an average of over N600 million annually to offset that cost. The upgrading of Akwa Ibom College of Arts and Science, Nung Ukim, Ikono to College of Science and Technology is also a boost to his education friendly profile and determination to build sustainable manpower for the emerging industrial economy.

During his campaign for the governorship seat of Akwa Ibom, Mr. Udom Emmanuel pledged to industrialize the State. He acknowledged industrialization as the solution to the challenge of unemployment that has ravaged especially our youth population. That promise was made in the context of the reality of that period when fiscal policy was favourable to the foreign exchange regime then. Shortly after he assumed the office in May 29, 2015, the foreign exchange market was trailed with volatility. Despite this unfortunate trend, Governor Emmanuel has attracted some industries to the State. It may not be uhuru yet but the journey of a thousand miles starts with a step. There is therefore a consensus of opinion that he has taken the right steps.

The industries so far attracted are Syringe Manufacturing Factory arguably the largest in Africa, Pencil and toothpick Factory, Electric Digital Metering Solutions, Fertilizer Blending Factory. Governor Emmanuel’s quest for the industrialization of the State started with the resuscitation of Peacock Paint Industry. Other industries which are at different stages of evolution and would soon become realities include Flour Mills and Coconut Refinery which are in various stages of evolution and Plastic Manufacturing which is in the offing. Perhaps the flagship industrial project – the Ibaka Deep Seaport when it comes on stream with its well conceived ancillary of Ibom Industrial City/Jetty would foist the expected economic revolution on the State.

Agriculture is another sector the Udom administration has given undivided focus. From the get go, the governor made it clear that any society that is coming on the heels of plummeting oil price, must as a matter of necessity diversity. Emmanuel acknowledged that it was time to actually put in place the actual economic diversification process long pontificated as a political rhetoric. He set to work and today the State is on its way to food sufficiency and foods security. Currently, there are about 1,600 hectares of cassava plantation in 15 local government areas of the State. They are 4,920 registered farmers and over 1000 hectares of rice farms have been cultivated. About 4500 youths have been trained on Cocoa Maintenance Scheme. Government is providing Fertilizer, oil palm and cocoa seedlings at subsidized cost. There are also the provisions of free corn seedlings. The Green House Initiative is providing vegetables like tomatoes, cucumber, lettuce etc, all year round. Akwa Prime Hatchery is churning out 10,000 day old chicks daily for poultry farmers within the State and catchment areas to take advantage of. Ongoing are the construction of 33 cassava micro processing mills and rice processing factory. There are also many other initiatives like training of 300 youths under Graduate Unemployment Youth Scheme and arrangements for the hiring of farming equipment/implements. One can say without equivocation that agricultural practice in the State is already witnessing a revolution.

But the revolution in the health sector may just outdo that of agriculture. The Udom administration has shown that it accords premium to the lives of Akwa Ibom people. According to him, no Akwa Ibom person should die unnecessarily through avoidable causes. It is why he has strengthened all healthcare facets from primary to secondary to tertiary and quaternary. Containers of state-of the-art medical equipment have been distributed to many of the hospitals some which have already been upgraded or undergoing upgrade. Etinan, Ikot Okoro, Ituk Mbang, Ikono-General Hospitals are some of the beneficiaries of this bold initiative of healthcare revolution. To boost the manpower needs of the healthcare sector, the administration has trained 20 Biomedical engineers, trained and certified 100 doctors and nurses in Basic Lives Support (BLS) and Advance Cardiac Lives Support (ACLS). It has facilitated accreditation for Schools of Nursing with 272 registered nurses. Government has also provided residential quarters for 48 House officers in the State Hospitals and 50 in the University of Uyo Teaching Hospital.

Manpower development, workers’ welfare, youth empowerment and capacity building are areas the Udom administration has given attention. Regular and prompt payment of salaries and entitlement to civil servants may look like a given but it is a feat in the context of Nigeria today where such obligations are relegated owing to cash crunch and insolvency experienced by many states. The release of backlog of promotions of civil servants covering 2012 to 2014 and totaling about 10,352 is a major boost in the welfare of benefiting workers and encouragement to others. There is also the recruitment of 4,761 teachers into the education sector, spanning Primary, Secondary teachers and Polytechnic and College of Education lecturers.

Governor Emmanuel who is an apostle of the maxim that Akwa Ibom people should earn a living and not beg for a living has trained over 20,000 youths in various skills. He has also made available N2 billion free interest loan for small scale entrepreneurs and traders. In the area of sports and other social investments, he has through strategic management turned Akwa Ibom into the football capital of Nigeria. The State has won FA cup twice in 3 years. Team Akwa Ibom finished second during the 2017 National Sports Festival. Also in social investment, special children’s Home and Divine Children’s Home all in Uyo are eloquent testimonies of the governor’s compassionate disposition.

Governor Emmanuel’s 36 months stands out as an exemplar in service delivery driven by leadership with mission and vision. His unparalleled commitment has sired robust development milestones in 3 years that can hardly be condensed in an article. The governor, who has exceeded expectations in performance, stands tall and electable for another term.