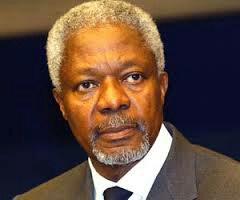 Former UN Secretary-General and Nobel Peace Prize winner Kofi Annan has died at age 80, his foundation confirmed Saturday.
Annan, who was born in Ghana in 1938, served as the seventh UN Secretary-General, from 1997 to 2006, and was the first to rise from within the ranks of the United Nations staff.
He had been a member of The Elders, a humanitarian group of a dozen leaders and activists of worldwide stature formed by Nelson Mandela, since it was founded in 2007. In 2013, Annan became its chairman.
The Kofi Annan Foundation confirmed his death with “immense sadness” in a statement posted on Twitter.

Biography
Kofi Atta Annan was born in Kumasi on April 8, 1938. Since 1960 Ghana has been a republic within the British Commonwealth, a group of nations dependent on Great Britain. Named for an African empire along the Niger River, Ghana was ruled by Great Britain for 113 years as the Gold Coast. Annan is descended from tribal chiefs on both sides of his family. His father was an educated man, and Annan became accustomed to both traditional and modern ways of life. He has described himself as being “atribal in a tribal world.”
After receiving his early education at a leading boarding school in Ghana, Annan attended the College of Science and Technology in the capital of Kumasi. At the age of twenty, he won a Ford Foundation scholarship for undergraduate studies at Macalester College in St. Paul, Minnesota, where he studied economics. Even then he was showing signs of becoming a diplomat, or someone skilled in international relations. Annan received his bachelor’s degree in economics in 1961. Shortly after completing his studies at Macalester College, Annan headed for Geneva, Switzerland, where he attended graduate classes in economics at the Institut Universitaire des Hautes Etudes Internationales.