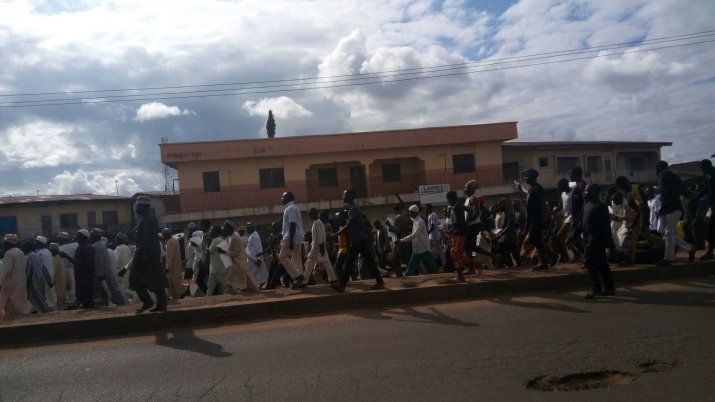 Members of the Islamic Movement in Nigeria in Kaduna took over the Nnamdi Azikiwe Way in a massive protest march calling for the release of the leader Sheikh Ibraheem Zakzaky after 1000 days in illegal detention.

In a statement shared to the public by members of the Movement, Sheikh Abdulhamid Bello Zaria called for the immediate release of the leader and his wife.

“On a final note we reiterate our call for the immediate release of our leader Sheikh Ibraheem Zakzaky, his wife Malama Zeenah and other hundreds of detainees since December 2015 unconditionally” he stated.

The Movement also called for anyone found guilty of the mass murder of innocent unarmed members of the Movement to be brought to book.

“We believe that all those involved in this inhuman massacre should be brought to book and prosecuted accordingly” he lamented.

Condemning the Nigerian government for disrespecting the laws of the land and killing unarmed civilians, the spokesman explained that even as the leader of the Movement has been ordered to be released by a court of competent jurisdiction, the Federal High Court, be compensated, be provided with residence in a state of his choice in the north of Nigeria and police protection, the Nigerian regime had acted in contempt of court and is still keeping him in detention.

The detention of the leader, Sheikh Zakzaky and his wife Malama Zeenat Ibrahim followed a massacre that took place from 12th to 14th of December 2015 where the Movement says over 1000 of its people were extra-judicially killed by the Nigerian Army on the order of the commander in chief.

Sheikh Abdulhamid further exposed the genocide committed the perpetrators of the massacre explaining that the Kaduna state government, through the secretary to the state government confirmed to the Judicial Commission of Inquiry JCI, into the killings set up by the state government, that 347 members of the IMN were buried in a mass grave at Mando village in violation of all state, religious and international laws including the Geneva Convention.

The Movement reiterated its non-violent stance insisting that it will continue to seek redress through peaceful means until all those involved are brought to book.