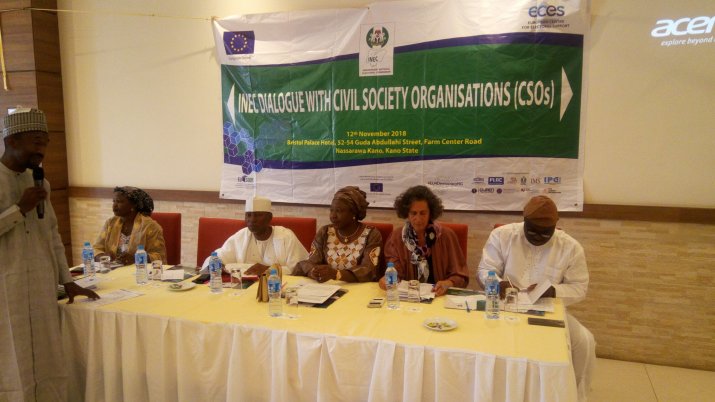 Functions of the observer organizations during the coming 2019 general elections have been highlighted by the Independent National Electoral Commission, INEC Commissioner, Mrs. Antonia Okusee Simbine in Kano during an event for dialogue between INEC and Civil Society Organizations, CSO of the Northern Zone in Kano on Monday.

She explained that their duty is to observe the election and how it is going on and report back to the commission as well as advising on what to do to improve the efficiency. She added that it is not part of their function to give any instructions on the field, support any party or identify with any.

She called on the Civil Society Organizations to support the INEC whenever it is doing things rightly and to also enlighten the political parties on the right things to do at all time to achieve a successful election outing.

The INEC Commissioner also called on the CSOs to use their outreach to sensitize the electorate on the need to come out to vote and to observe the regulations set aside such as, shunning political violence and other negative acts that are detrimental to the elections.

Speaking on the adjustments about the process of elections she explained that there is no more going to be a separate process of accreditation of voters before the casting of votes for which the system now allows for one to be accredited and allowed to vote at the same time.

Mrs Simbine also stated that special provisions have also been made for vulnerable people like the aged, pregnant women and people with disabilities who would be given preference during the elections.

Another progress she added is that of an improved smart card reader that could capture more finger prints during accreditation. It will record the accreditation, the numbers of those that voted, store the information and transmit it to a central server where the electronic data is stored before the manual ones will be brought to verify.

She dismissed claims by some sectors of the society that the processes introduced were meant to give an upper hand to the ruling party stating that they are introduce only to make the voting processes efficient and more transparent.

In a goodwill address delivered by the Senior Legal Expert of the European Center for Electoral Support, ECES, Maria Teresa Mauro expressed gratitude for INEC’s commitment towards strengthening their partnership with CSO’s across the country.