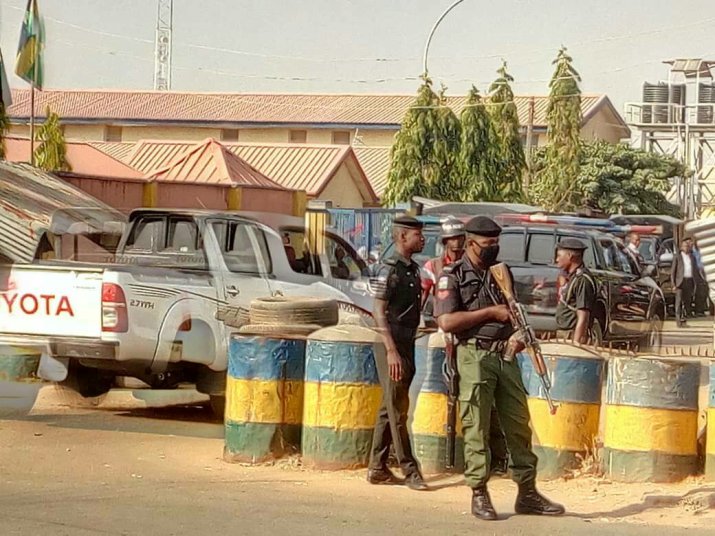 The case before Justice Gideon Kurada of Kaduna High Court where the state is charging the leader of the Islamic Movement in Nigeria, Sheikh Ibraheem Zakzaky of abetting murder has further been adjourned to the 25th of March.

Addressing journalists after today’s sitting, the lawyer representing the state government, Bayero Dari said that the court has instructed them to adjust their charges and charge Sheikh Zakzaky and his wife alone.

“The court wants us to simply go and separate the charges and charge Malam alone and his wife and continue hearing” he stated.

This is because the third and the fourth accused persons have not been reached by the government’s counsel.

Dari further declared that they were ready to continue with the case today and have even come with some of their witnesses but they have to go and adjust their charges to reflect only Sheikh Zakzaky and his wife Zeenatuddeen Ibrahim.

Addressing newsmen after the court case, the lawyer representing Sheikh Zakzaky, Femi Falana SAN explained that Sheikh Zakzaky and his wife were shot by the Army in December 2015 and since then they have not been given the adequate medical attention they require and hence the need for them to get the required and sufficient treatment to face the trial.

“The fact that since both of them were shot by the army in December 2015 they have not been given adequate medical attention, therefore they have to allow them remain alive so that they could stand for the trial” he stated.

He further explained that they have applied to the court directly to give them urgent medical attention or on the alternative to have them flown abroad for medical treatment.

The senior advocate also stated that it is apparent that the government doesn’t have enough medical facility to take care of them having not done so for the past two years now.

“Malam has lost an eye as he was shot in the eye and the second eye has developed glaucoma. In the case of his wife the bullets in her have not been totally extracted after two years. She is suffering excruciating pains currently” he explained.

Falana then mentioned that there is no way both of them can stand trials in the condition in which they are.